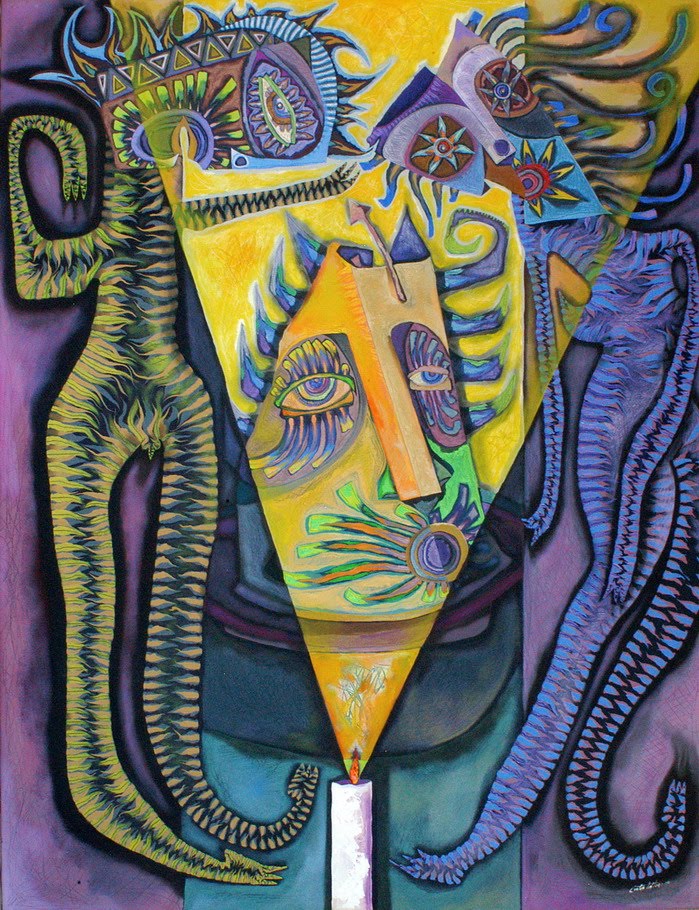 It is no easy task to define the work of Carlos del Toro. Before such an artist, whose colorful, rising trajectory has received both descriptive commentary and praiseworthy review, totally justified, it is virtually impossible to coin a simple term.
We could say, perhaps, that we face a pictorial “Gabo”, but would remain at the edge of ignorance. Or may say we stand before Vivaldi, before an opera, but this would be daring, even unjust. Nonetheless, del Toro’s work transports us to the world of music, rhythms of songs and drums which awaken and open the doors to our dreams.
Above all, Carlos del Toro is a poet of the image, a conjurer of motion and space, where female dancers move against a shadow, presumably a male counterpart, placed as background instrument with the sole purpose of creating a visual equilibrium. A scene within a forest of colors with a Biblical palette makes us reminiscent of Magic Realism, specifically One Hundred Years, precisely because of the Aurelianos and the showers of fish, imagined, arrived, and foretold. From this riot of color, which the artist handles masterfully, and of three dimensional scenes on embossed paper, a symphony emerges and carries us to Ravel’s Bolero while we dance to a fakir’s tune hidden in the work itself. A challenge the artist masters with craftsmanship and talent worthy of the great Cuban painters of the 20th century.
In his spectacular pictorial trajectory, Carlos del Toro spins tales which demand such interpretation and reinterpretation that the viewer becomes, inevitably, a dreamer reconstructing his/her own inner anecdotes. Sculptor of memory, builder of the canvas, sorcerer of color or simple wizard of charms, Carlos del Toro makes a profound impact on our psyches.

Elegguá: Elegguá is the first of the gods of Yoruba pantheon to be called in every religious act or festival and the last to say goodbye. That is why it is said that it opens and closes the roads. One of its functions is to be a messenger of the gods. He lives in most cases behind the front door of the houses, as he is the absolute owner of the roads and the destination. It is who closes or opens the astral for the happiness or unhappiness of human beings. Its hand of snails is the greater, since it consists of 21 pieces. Its colors are red and black.