Hammershøi, a painter who immortalized silence

The painter of tones and calm

Architecture, geometry and light. These are the keys to understanding the bewildering work of the Danish Hammershoi. A painter, perhaps unknown, but it figures prominently in the history of art as heir to Vermeer and Hopper precursor place. 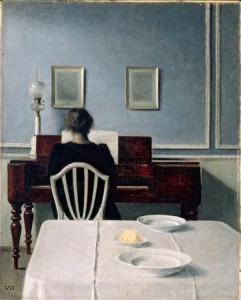 Interior with a girl on the piano. 1901. Vilhelm Hammershoi

Probably for a spectator of our time, the minimalist intimacy of Vilhelm Hammershoi (Copenhagen, 1864-1916) radiates an intense feeling of calm. Nothing to do with what austerity and stillness of his paintings caused in the minds of most of his contemporaries. And in fact, if you watch closely, your canvases can become really disturbing, because we find doors that do not have handles, table legs with impossible shadows or black masses in the middle of a room full of light. 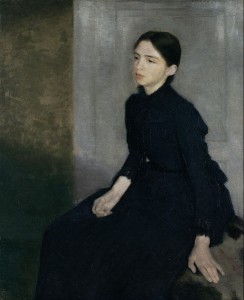 His portrait of his sister Anna, at the age of twenty-one, his first work on a large scale, was already advancing many of the characteristics of his painting: the white door, the dark colored dress, the use of a somber and very refined chromatic range Gray and amber, the sobriety or introspection of the person portrayed. Hammershoi repeated these preferences over and over again in his works along with his taste for the back portrait and the interiors. Coming to make more than 60 images of the apartment where he lived with his wife Ida in Copenhagen. A floor full of furniture and paintings that the Danish eliminated or reorganized to create their compositions. Why? 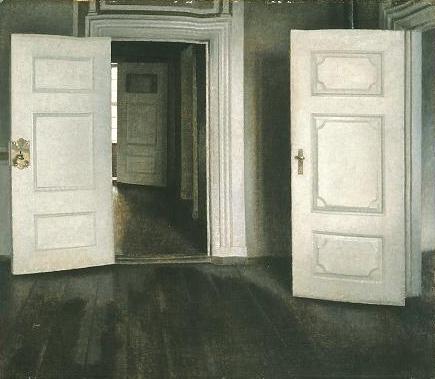 Hammershoi studied, like his predecessors of the Golden Age, in the Real Danish Academy. He left this institution in 1883 to finally develop a style that included the influence of artists such as American Whistler or the Dutch Vermeer and Pieter de Hooch. This influence is seen in the visual game that recreates in scenarios with open doors and windows in the background. Although, he did not use this resource to connect the interior with the outside or to reveal something, except a strip of light. Or, simply, the reflection of sunlight passing through the window and illuminating the dust in the air. 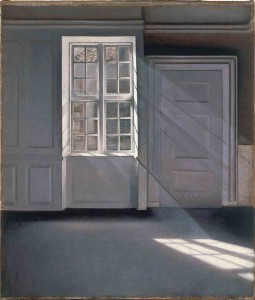 In other paintings, such as Resting (1905), he introduces a new sensuality through the figure of the woman, counteracting the cold geometry. The young women, with their backs, wear their hair gathered with few loose locks. The neck, free, receives the light. This gesture is reminiscent of Friedrich’s canvas, Woman in the Window (1822), in which light also strikes the back of the girl’s neck. The Danish also includes the blunting of the blouse that insinuates the whiteness of the back, in counterpoint with the flower-shaped cup located above the piece of furniture. 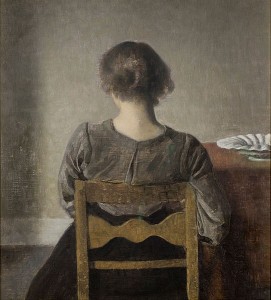 The truth is that Hammershøi sought beauty in the lines and in the architectural content of images, especially in empty rooms. And he found it in his balance, emphasizing or dispensing with certain details with the ultimate aim of retaining harmony in his compositions.