About Hokusai, the Painter of ‘The Great Wave’

Home > Art  > About Hokusai, the Painter of ‘The Great Wave’

08 Jun About Hokusai, the Painter of ‘The Great Wave’ 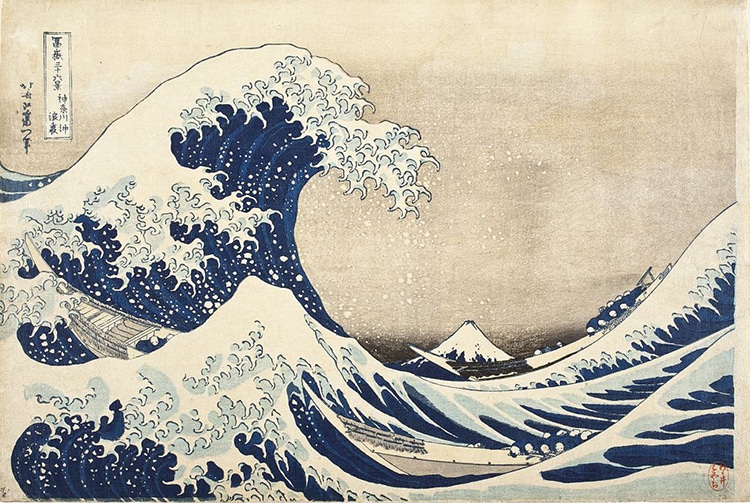 “The Great Wave off Kanagawa” by Katsushika Hokusai via Wikimedia Commons

While most people instantly recognize The Great Wave off Kanagawa, some may not know anything about its eccentric creator, Katsushika Hokusai. Having produced a colossal volume of around 30,000 works during his lifetime, The Great Wave woodblock print wasn’t produced until 60 years after he first started creating art. The illustration of a crashing wave, three boats, and the peak of Mount Fuji was part of the 36 piece series Thirty-Six Views of Mount Fuji, and lead to the master artist shaping the course of the Impressionist movement in Europe.

During Hokusai’s career, strict Japanese government policies prevented any import or export of goods, and also forbade free movement of its people and foreigners wanting to exit or gain entry to the country. When Japan finally opened its borders in the 1850s, Europe rapidly embraced Japanese art, especially the work of Hokusai, whose artwork fell into the hands of some of most renowned western artists in history, including Claude Monet, who collected 23 of the Japanese artist’s prints.

Who was Katsushika Hokusai?

Believed to have been born on October 30, 1760 (even he wasn’t completely sure), Japanese artist, ukiyo-e painter, and printmaker Katsushika Hokusai went by more than 30 names throughout his career. Although changing names was common practice among Japanese artists at the time, Hokusai took the tradition even further by giving himself a new pseudonym every few years. His adopted names included Shunro, Sori, Kako, Taito, Gakyojin, Manji, and of course (as he’s most well-known), Katsushika Hokusai—a name he kept for half a century. “Katsushika” refers to the part of Edo (the former name of Tokyo until 1868) where he was born, while “Hokusai” means “north studio.”

Other than changing his name, Hokusai never liked to stay in one place for too long, and by the end of his life he had relocated a total of 93 times. Why? He supposedly hated to clean, and would let his various abodes build up with dirt before they became unbearable, forcing him to vacate. 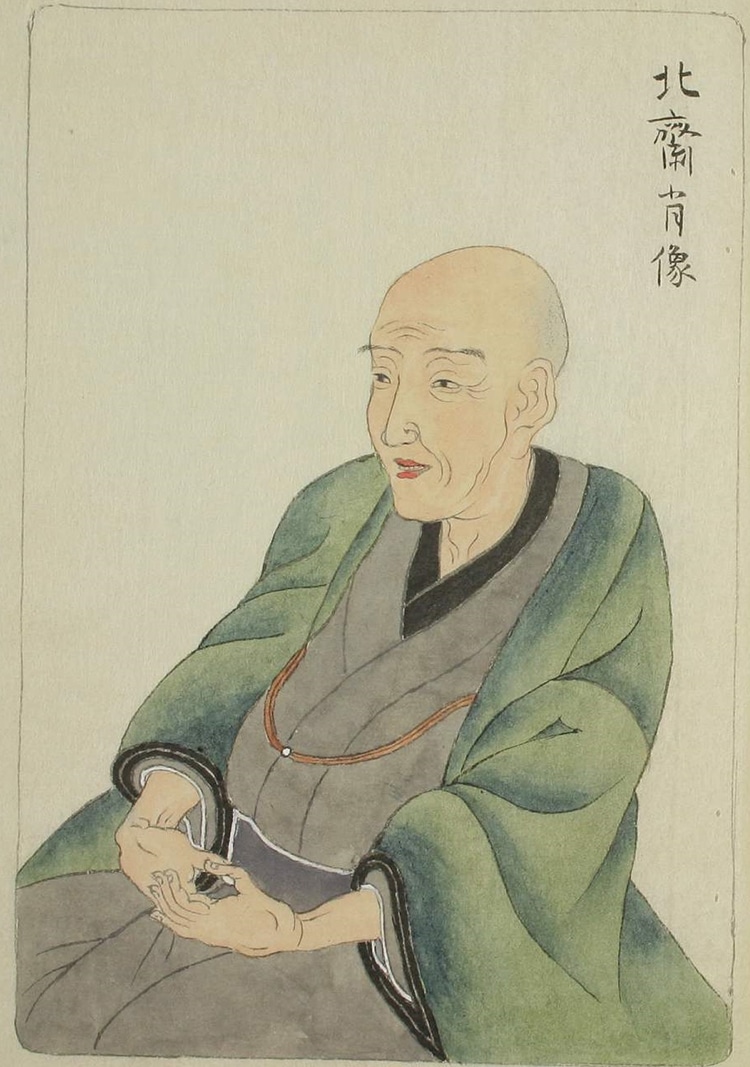 “Portrait of Hokusai” by Keisai Eisen via Wikimedia Commons

As a child, Hokusai lived with his uncle who worked as a mirror polisher in the household of the commander-in-chief of feudal Japan. A prestigious position at the time, it provided direct contact with the upper class, as well as an excellent education for Hokusai, who was intended to continue his uncle’s trade after he died. However, during 19th-century Japan, learning to read and write also meant learning to draw, and Hokusai quickly started displaying artistic talent when he was just 6 years old, which lead him down a different path.

During his early teens Hokusai worked as a clerk in a library, and later he became a woodblock carver’s apprentice, where he learned the knowledge and skills that later lead him to create some of his most famous works he’s known for today. At 19, Hokusai joined the studio of ukiyo-e artist Katsukawa Shunshō and embarked on what would become a 70-year career in art. 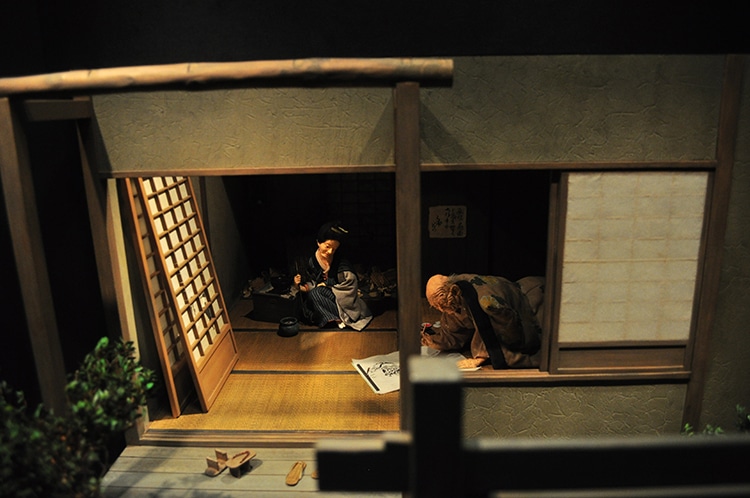 During his early career, Hokusai was a leading designer in dioramas, made as toys for children. He also created many board games, which often featured small landscape designs. These works perhaps mark the start of his journey towards the many unique landscape compositions he created, still famous today. Among various illustrated publications, between 1814–19 Hokusai also created a series of images for aspiring artists to copy. These works were compiled into a best-selling book titled Hokusai Manga, and document one of the earliest forms of Manga art. 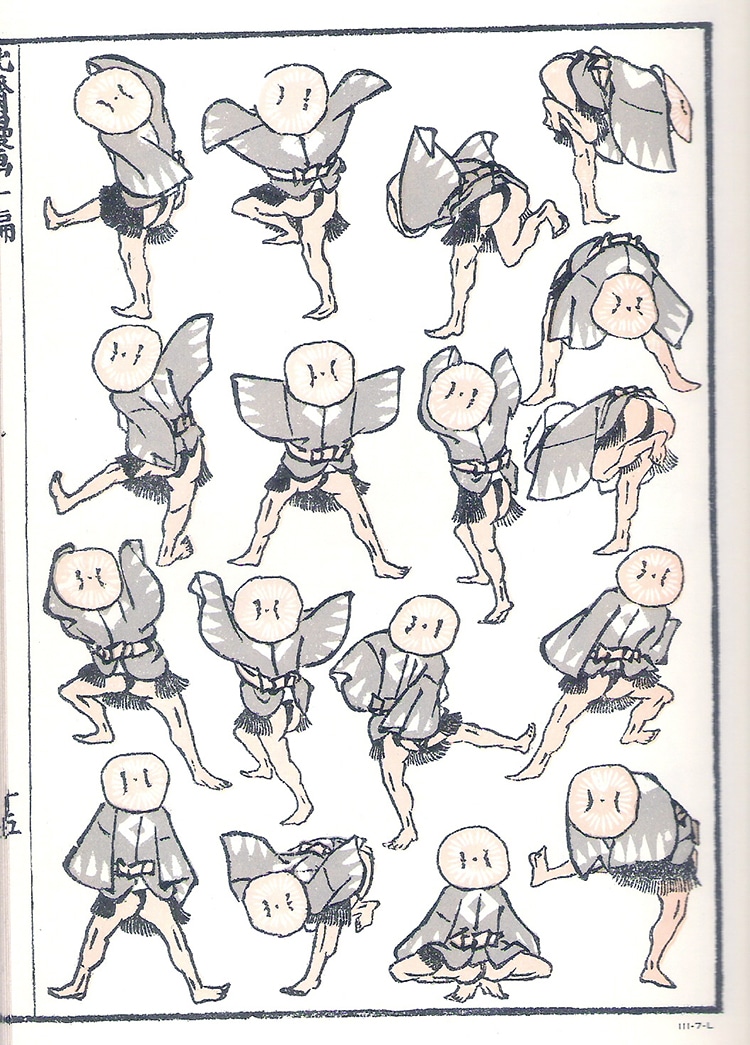 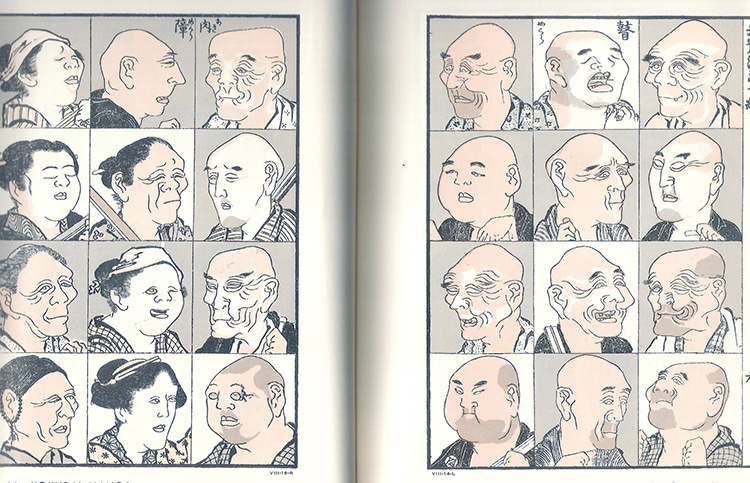 Despite being extremely productive, and often painting from sunrise to sunset, Hokusai had a series of personal setbacks during the middle of his career. Both of his wives and two children died before him, at 50 he was struck by lightning, and during his 60s he suffered a stroke that required him to relearn his art. He was also forced to pay off his grandson’s gambling debts, leaving him in financial straits for the rest of his life. This series of dire events lead Hokusai to turn to what he loved best, and he began his famous series Thirty-Six Views of Mount Fuji, which included The Great Wave off Kanagawa in 1830.

The instantly recognizable 19th century masterpiece titled The Great Wave off Kanagawa gracefully captures the power of the ocean in hues of Prussian blue—a pigment that previously had only been used by the richest of artists due to its rarity. Also known as The Great Wave, the print is not purely Japanese in style. Hokusai also studied European works and was particularly influenced by the linear perspective used in Dutch art.

Although the eye may be drawn to the huge crashing wave, the most important subject is the small peak of Mount Fuji in the distance, which Hokusai painted over and over again in a series called Thirty-Six Views of Mount Fuji. The woodblock prints, full of vibrant colors, depict Japan’s highest mountain from various viewpoints and environments.

Among the most famous is South Wind, Clear Sky (also known as Red Fuji) where Mount Fuji is seen close up, snow topped, and printed in a gradient of bright red. The 35th print, titled Ejiri in Suruga Province illustrates Japanese farmers struggling to battle extreme winds during winter, with Mount Fuji featured in the background, drawn with one simple line. Easily mass-produced, at first Hokusai sold them at cheap prices, but once tourism in Japan began to boom, the prints soared in price, and today, rare originals can cost thousands of dollars, depending on time of production. 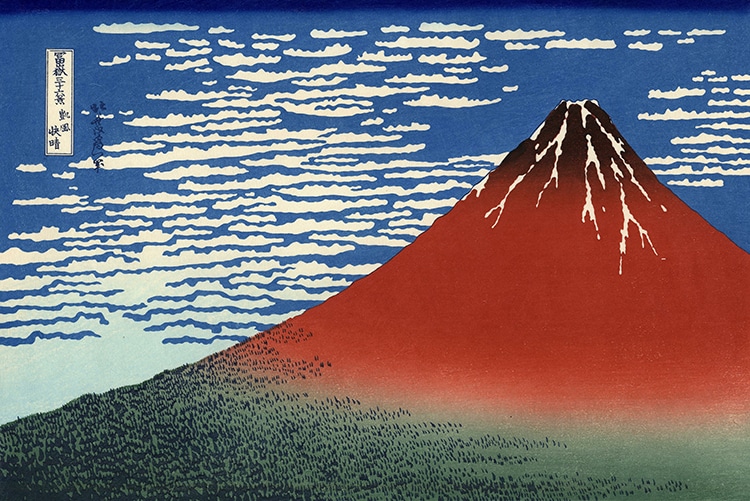 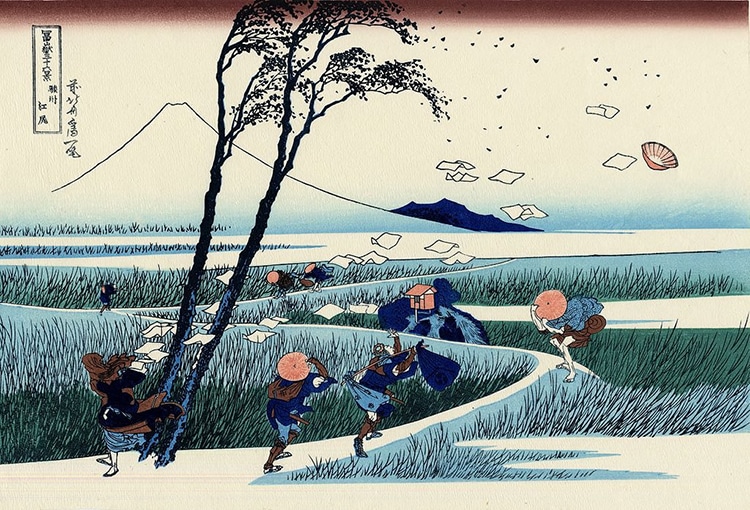 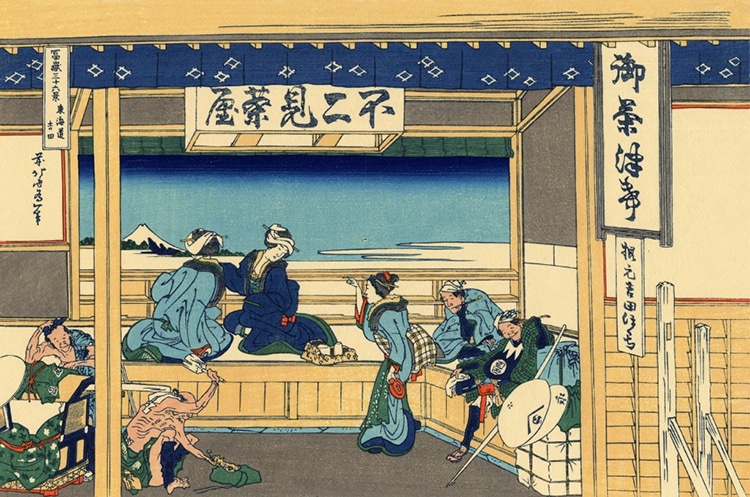 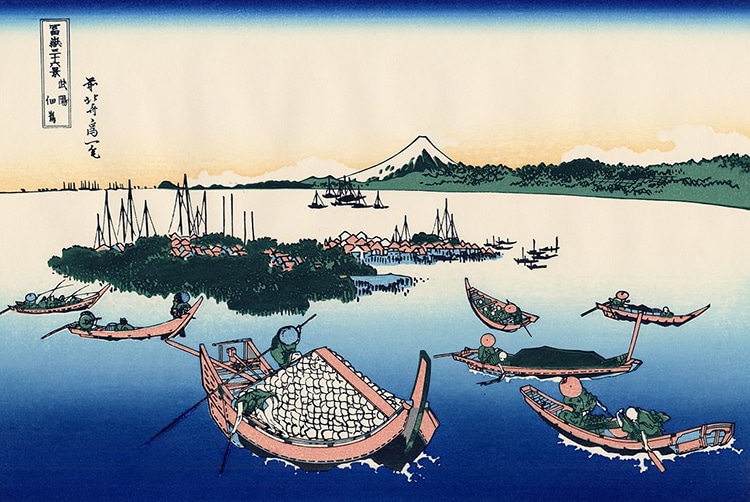 Despite its popularity, the series was not considered to be “great art” by Japanese art historians at the time, who saw woodblock prints as a form of commercial printing, rather than a fine art form. However, today original prints of The Great Wave are treasured by many museums around the world, including The Metropolitan Museum of Art in New York City, the British Museum of London, the Art Institute of Chicago, LACMA of Los Angeles, and Melbourne’s National Gallery of Victoria.

Hokusai also created various other woodblock series such as One Thousand Images of the Sea (1832–34), also known as Oceans of Wisdom. The collection of ten prints feature scenes of fishermen working, and explore two of Hokusai’s favorite themes—hard work and the forces of nature. This is illustrated in Chōshi in Shimōsa Province, which shows fishing boats struggling in a stormy sea, echoing the scene of The Great Wave. In another series titled One Hundred Ghost Tales (1889-92), Hokusai illustrates Japan’s fascination with ghost stories. 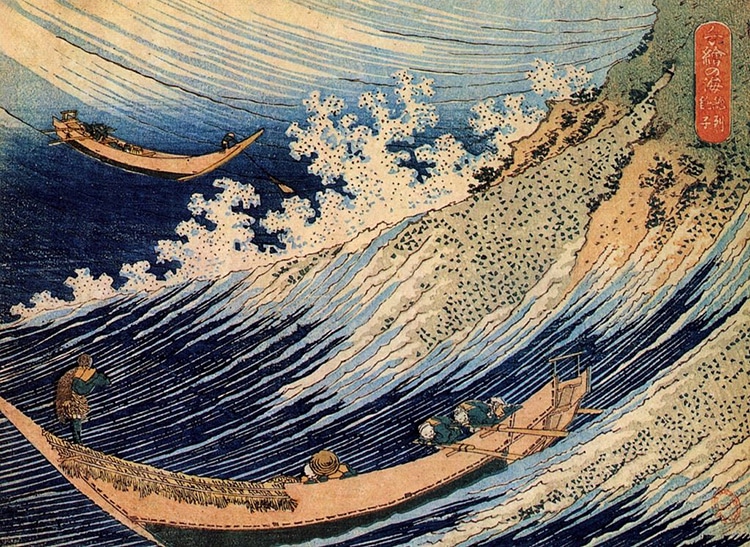 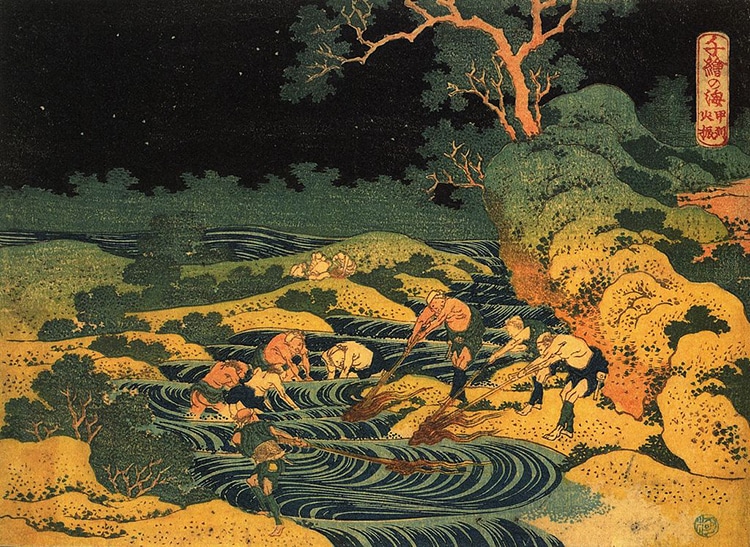 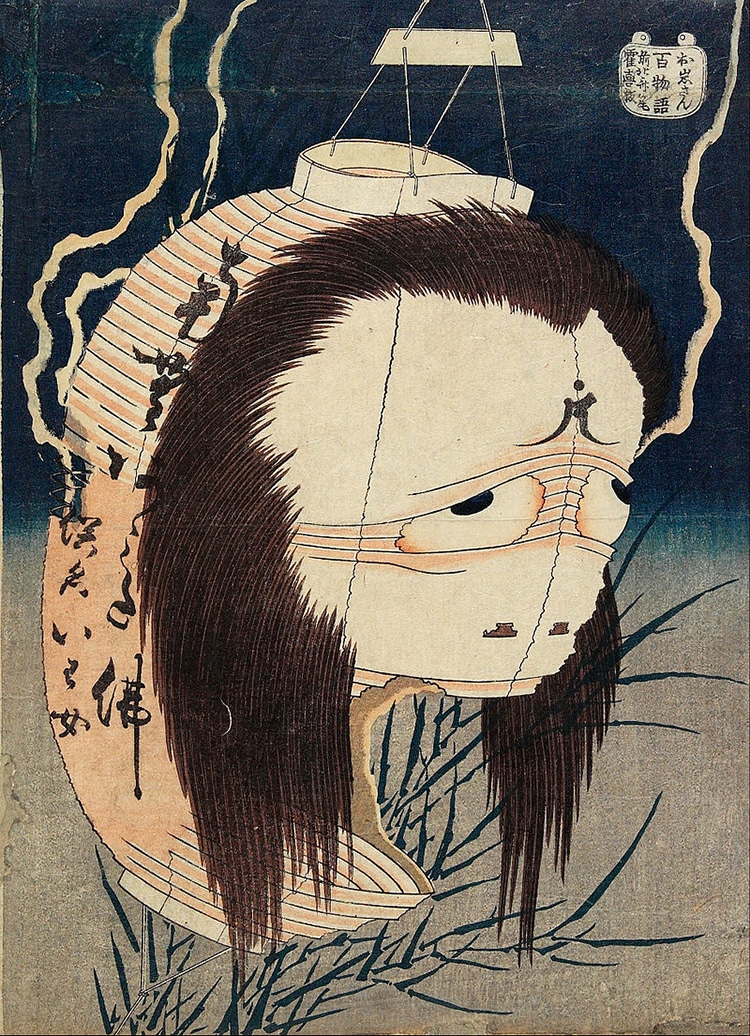 Believing that he would live to 110, Hokusai once said, “When I am 80 you will see real progress. At 90 I shall have cut my way deeply into the mystery of life itself. At 100, I shall be a marvelous artist. At 110, everything I create; a dot, a line, will jump to life as never before. To all of you who are going to live as long as I do, I promise to keep my word. I am writing this in my old age.” On his deathbed at age 90 (1849), he reportedly said, “If heaven had granted me five more years, I could have become a real painter.”

Although he didn’t make it to 110, many around the world believe Hokusai achieved the status of a master artist. Somewhat fittingly, his tombstone bears his final pseudonym, Gakyo Rojin Manji, which translates to “Old Man Mad about Painting.”