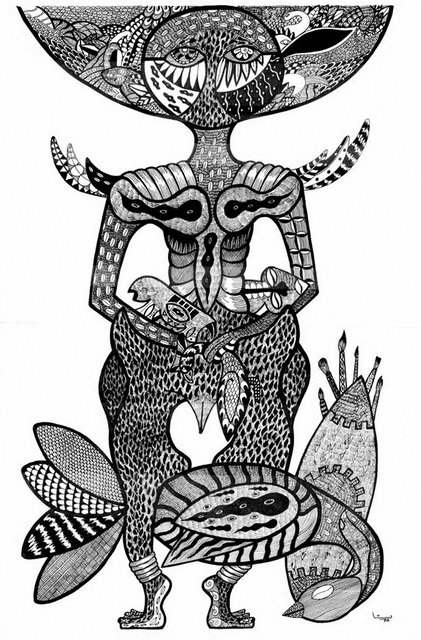 When Lino Vizcaíno arrives at the place where he moves, the legends arrive with him, life comes from the Yoruba point of view and also the way of being of the orishas arrives. Lino is one of the painters, to be more exact, of the most concrete, explicit and mathematical cartoonists that my eyes have managed to perceive. If drawing an exact line, which later becomes Oshun’s hair, is accurate, forgive the redundancy, then that was made by Lino, the painter of the African black ancestry world, of the ancient Cuban world.

Lino came to visit us within a plan, still not concretely finished, to call artists for the promotion and sale of their art in Mexico and the world. Among their suitcases came not only Cubanness but also the soul of a nation that carries in its veins the maroon blood of slaves who fled and freed themselves to continue living their world in another world.

Lino, why do you draw the whole Yoruba mythological group?

First because it is immense, second because it is my environment and third because I pay homage to this great group of spiritual beings that are the essence of our life. 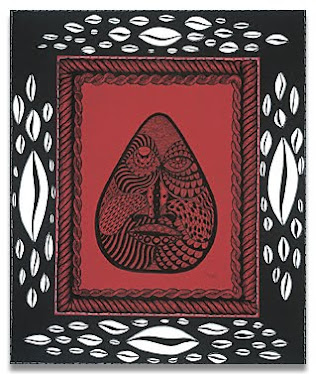 Besides painting the immense Yoruba pantheon, do you draw the current Cuba or the old and classic one?

Already the Cuba before me has registration. Each painter looks for the way to shape his context or thought in his own way. I had to listen to the ancestral and ritualistic Afro Caribbean legends through the lips of my grandmother, who said that my great-grandfather came from a place of big animals and that one day bathing with his friends in a river was captured by men with beards red My family always emphasized that I and they came from a distant place, from a place where there were big animals that ran flapping their huge ears and goats with a huge neck like stairs that looked at the sky.

Was that world Africa?

Yes, it was the central strip of the immense African continent. That’s where my ancestors came from and specifically my great-grandfather who was taken hostage and then sold as a slave to the great lords of the Cuban sugarcane. That story corroborated when I visited Angola in the 80s and began to rub against the context that tells me that my ancestor came from there and that was his world, where he was extirpated to reach the Caribbean.

Was your grandfather a black cimarron?

No, it was a man who assimilated to a Cuba that was born prosperous given to the “Sugar Bonus” that prospered in the market and that filled the coffers of some. There he inserts himself and works and we are his descendants born and raised in Guanabacoa. It is said, although I have not corroborated it, that my grandfather was one of the mambises who fought alongside Carlos Manuel De Cespedes. It is a task that I have pending as an artist and as a historian of my roots. The stories are scattered, in many parts of Cuba and if I do not do it in time nothing will be left for history and for the next generations. For the future.

How were your beginnings as a cartoonist?

Like every child, restless to draw my surroundings. My grandmother called me to eat and I kept hitting the pencil on the paper. I loved making exact lines and lines that defined a figure.

And tell me your processes to integrate in the world of Cuban visual arts.

That is a beautiful part of my life. I started when I was studying in high school, what here in Mexico called high school. FEEM, the Student Federation of the Secondary School, as well as the FEU, the University Student Federation, holds annual competitions and arts tournaments. In them I participated and I was made known. At this time I used color. A flat color that I used to fill the image. I still did not use the tones and the break of color, much less reach the point of chromatism that today style.

Of course, when I visit and live in Angola from 1982 to 1984, my life begins to develop a phenomenon of incorporation and search for my ancestral, as well as my African roots. My mom and my grandmother told me that I should participate in my Yoruba religion, however it was not integrated nor did I have it as a referendum. It is in Africa where I understand the immensity that for me and my art could have the Baroque syncretism that I was living.

According to what you tell me, the African continent is a series of events that served as support and school.

That’s right, for me Angola is the book for which I walked. In this continent everything is great, magical and magnificent. If a mosquito bites you, you can die. If the sun does not come out and it rains then it is the flood, if there is a drought the catastrophe is biblical. The strongest contrasts a person can see are there. Move from the red and dry earth to the more intense blue-green mountains … only there.

So you bring, from Angola, a gift from Gods to Cuba?

Of course, when I arrive in Havana, I start working with a state company, “dear,” which decorates large spaces as tourist spaces to name an example. This company asks me, together with a multidisciplinary team, to do a remodeling of an area of the city of Trinidad, now a UNESCO cultural stronghold, and there I have contact with the great painters of the primitive expression of painting in the Cuban province. They begin to nourish me their color and their shapes, their lines and the density of the message painted and drawn. It is a beautiful stage because it was pure reflection, which led me to determine that this was what I wanted.

I begin to draw then the world of the Güijes, or Jigües as it is its original name. They are the beings that inhabit the forest. They are like naughty children, I believe that in Yucatan they are called Aluxes. They are mythological beings that take care of the natural and human environment and are the bridge between nature and man, man and deities. They’re very beautiful. Incredible but true this is taking me to know more and more the context Yoruba, Santero and Orisha and I start to capture on paper.

By then the Cuban authorities have seen in Afro-Caribbean religious art a vein of expression and genius. And Mendive, Belkis Ayón and Ana Rosa Gutiérrez are in the arena doing this type of work, or rather this format, this school.

Did the frictions of the artists and critics help to consolidate your work?

If, of course, an artist who does not allow artistic friction, criticism, which is so necessary all the time, is a dead artist, a fruit that remains in the decoration and not in the chronic register of the history of the arts of a place and of a context

One of my first individuals I do in the Gallery MERCEDITAS VÁLDEZ and there comes a very good review that valued the work as a project that integrated the syncretic with the exhibition. It was very beautiful.

However I have to clarify that before this I had a great relationship teacher – student with the painter Ana Rosa Gutiérrez, who was a woman who made the grade in the graphic arts of my country and who founded, along with others, the Graphic Workshop (TG ), so taken into account today as a world reference. She gives me works to read, subjects to write on cardboard. It was a woman who gave me seeds for my fruits. What a pity that we left because it was first.

What would be your recommendations for Visual Arts students …

My recommendations go to the students, who must judge in a positive way the conveniences of which their work will be elaborated. On the other hand all the knowledge we have serious art dealers should be overturned there, because that knowledge allow them to move between what we call “art market”.

Yes, that market that is very difficult.

Is your work on the Santero World inscribed with these projects?

Of course, every work writes a record of life and this makes it universal. Of course, my way of describing the world establishes a form and I can transcribe it to what is sought and I can and I must adapt it to the required molds.