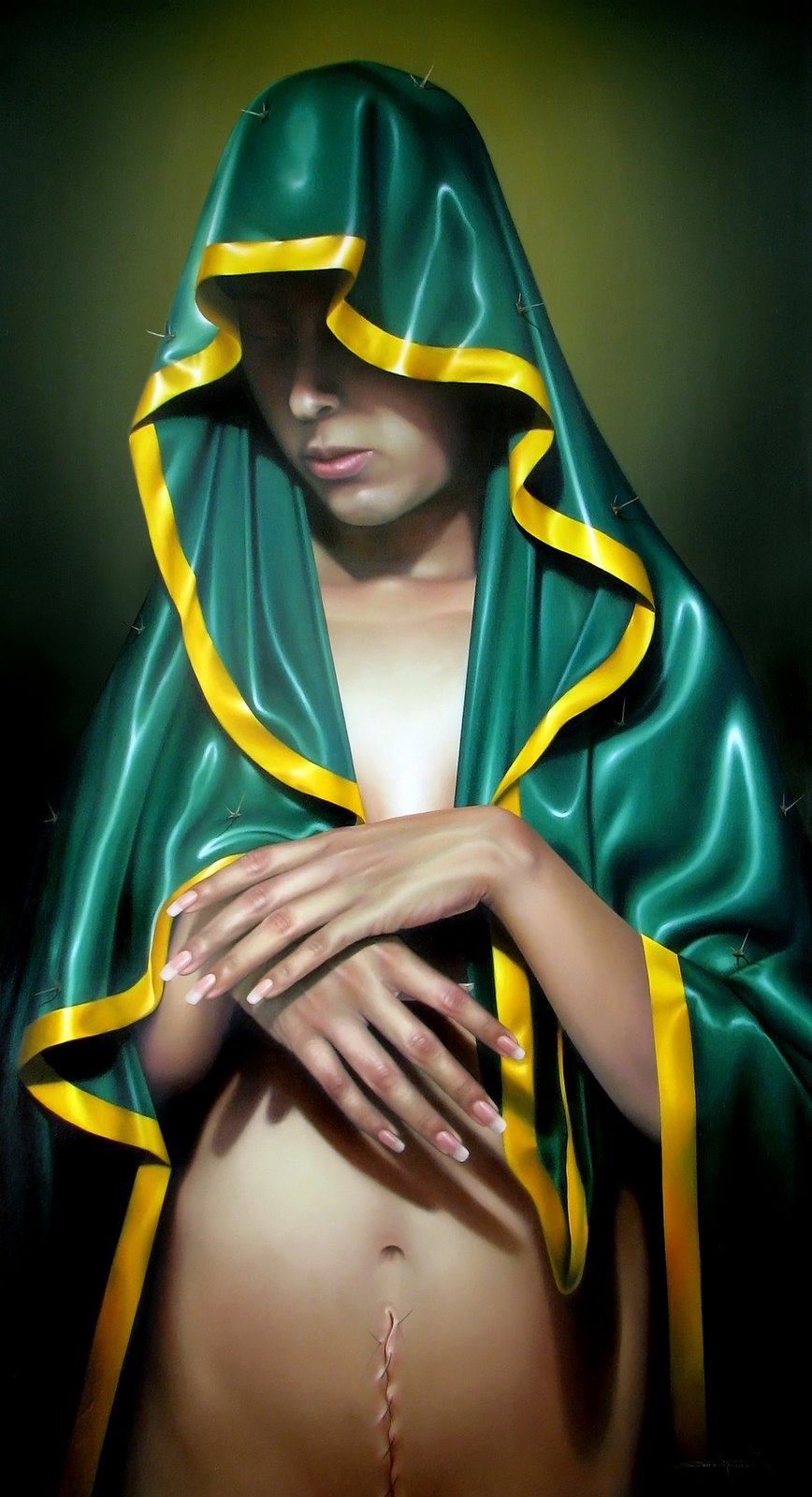 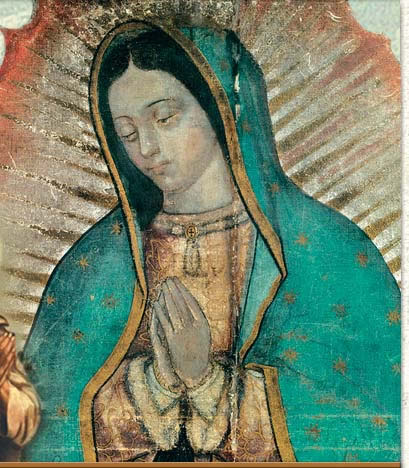 To speak of the Virgin of the Guadalupe, is to speak of all Mexico. Guadalupe, “La Lupita”, is everywhere: in the commercial sphere, not to enumerate the immense universe in which its image is used, in the spiritual, with the social notes that gigantically open gaps in all Mexican political activity, in the syncretic, because Guadalupe was born of several slopes.

It is born as a spiritual acylation of mother nature, represented in the Aztec, diffused towards the Mayan cultures and of the south of Mexico, the lupe, the guadalupe, the lupita is an embryo of country where the Mexican joins with the Marianismo. The Christian construction comes to us in a cascade of encounters and disagreements with the maternal image of Jesus Christ, the Mary who built the ecclesiastical foundations of the Roman Catholic church makes its dazzling appearance in Saucedo’s triptych painting.

The Guadalupano phenomenon, with multiple faces and visual varieties, is a complex world that starts from the moment our original inhabitants recreated the laws of nature that dominated it, germinating from the Chicomecóatl tree, among other points, Chicomecóatl, in Nahuatl “Seven-serpents,” the Mexican goddess of subsistence, especially maize, the chief patron of vegetation and, by extension, also goddess of fertility. This deity bears the sun behind him and it is his symbiosis with him that makes him strong, to be the mother of all living creatures, also the movements of life, the night, the winds and the hooting of the trees when are brushed by the breeze that comes from afar.

While Ayauhtéotl is the owner of the night and vanity, Chicomecóatl, very contrary makes a very different life marked by the natural growth of environments and towns.

Enrique Saucedo dares to “desacralize” this image and the descent of the sacrosanct pedestal to make her a woman, makes her so completely feminine and contemptuous that although the mother of Jesus conceived by spirit, then to remain a virgin had to be administered cesarean and so is the Guadalupe de Saucedo.

The virgin is prepared to the Eastern way of hiding behind a biblical veil. He shows us his hands crossed on his belly, considering the stigmatization of his future procreation. It is an act of courage of the painter and also of humanization of an icon.

Evelyn P. Stevens, “Marianism: The Other Side of Machismo in Latin America,” states that: Marianism is the cult of feminine spiritual superiority, which considers women semi-divine, morally superior and spiritually stronger than men. This spiritual force engenders self-denial, that is, the infinite capacity for humility and sacrifice …

Thus sees this North American anthropologist at the birth of a social and religious current that ardently embraces all the corners of this continent. While in the painting of Henry the virgin has already given birth, silent is postponed as a divine message and remarcador of customs.

On the other hand the iconography that delimits the portrait is given by the color of the veil, in green, already raised its theory below. However it is not only the color, it is the inlays of thorns that well define three elements: The Cactus, popular symbol of the Mexican abroad, the pain before the human sacrifice made when delivering his son, mother nature: gaia earth in all the expression of the word. Three planes that intermingle to recreate a theoretical framework that defines not only the site of origin but the authentication of having a solid Marian proposal and with all possible Mexican elements.

“Lex Cesárea” is a picture conceived for the controversy, starting when the same apostolic and Roman church faced and confronts a public sector, Mexican politician who dealt with laws to transfer power and autonomy to individuals and medical ethics to decide on as punctuating topics as abortion and new family conceptions (transgender, gay, lesbian). The proposition is a cactus full of thorns.

At moments the virgin of Saucedo looks like a boxing lady accompanied by her bathrobe. A whole poem ode to the religious aggressiveness of an icon.